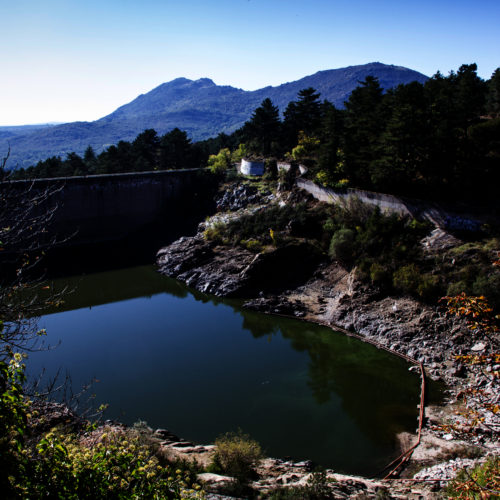 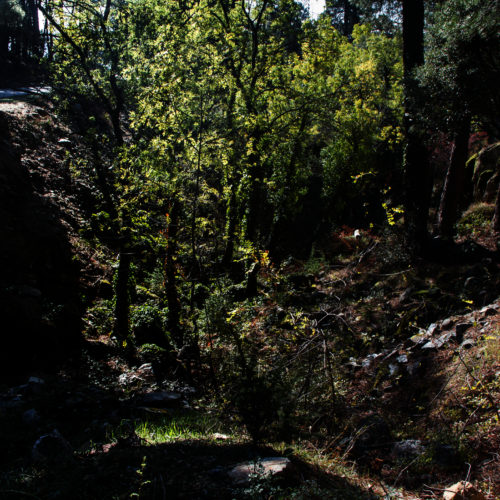 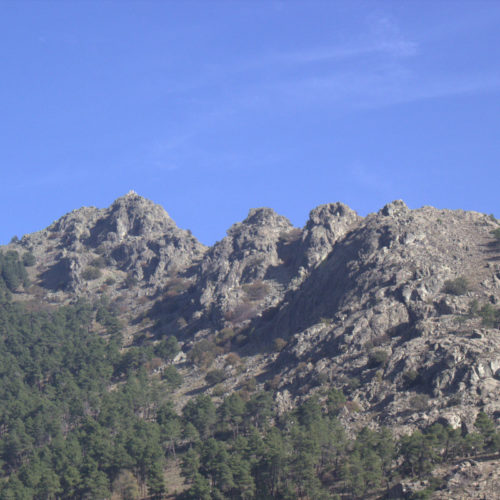 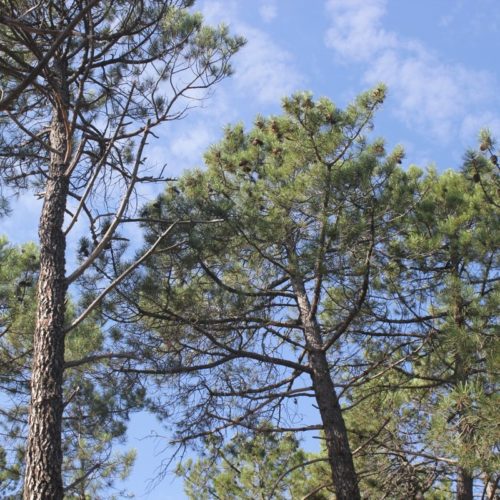 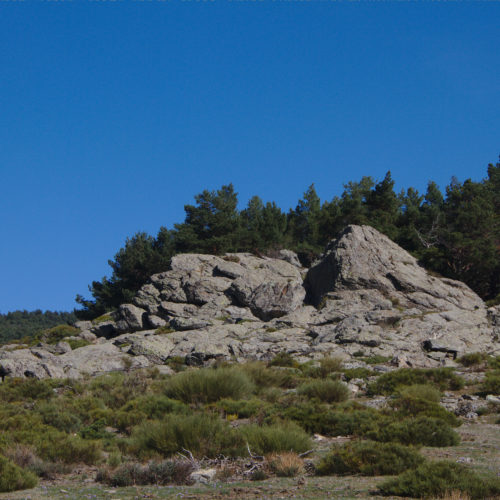 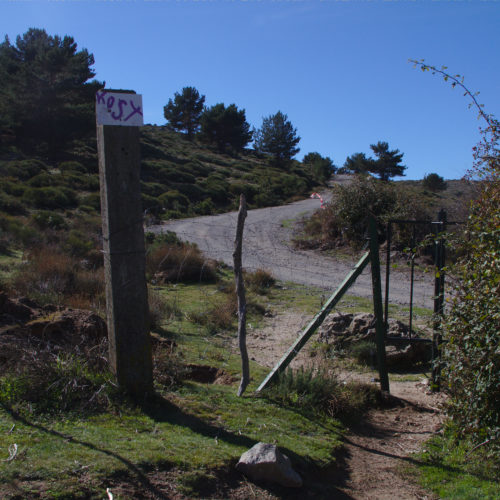 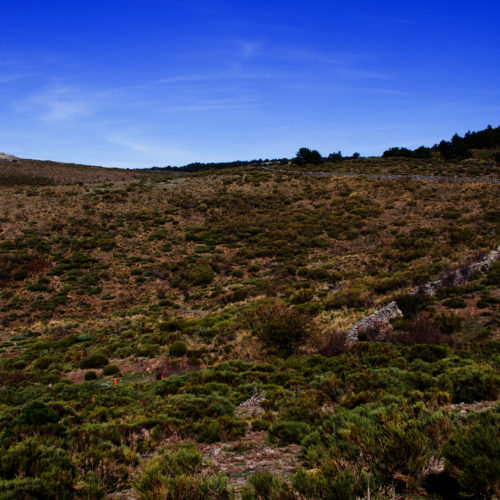 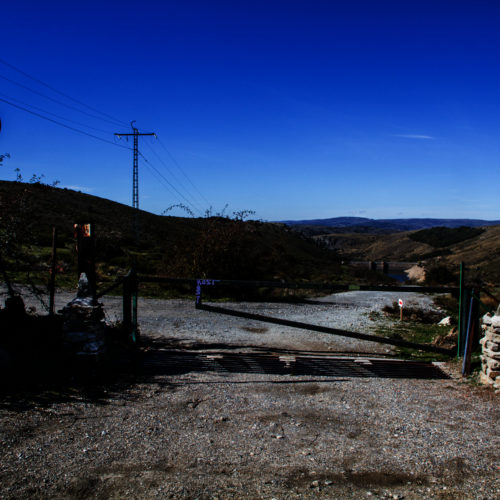 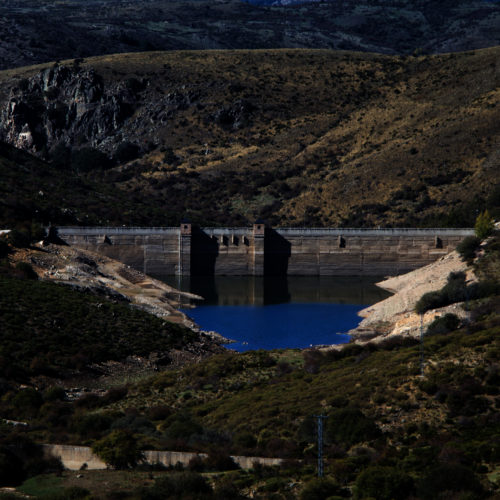 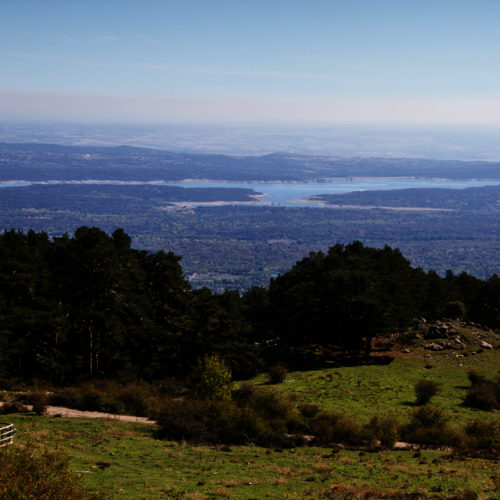 This route runs from the El Malagón resting point as far as the Cañada Real Leonesa droving track.

The route begins at the highest point of town, to the west. Begin by following the instructions to reach the Euroforum Felipe II, without actually going that far.

Head up to Calle de la Presa, and continue as far as the wall of the El Romeral dam, where the path begins. At this point the highway turns sharply to the right and a narrow  track begins, leading to the curious viewing platform of the Rural House over the El Romeral dam.

The wall you will see by the modern dam states that it is the work of Juan de Villanueva, built during the reign of Carlos III.

Only a few traces remain of the original dam dating from the time of Felipe II. At the centre traces of another wall belonging to the dam built in the era of Alfonso XIII may be seen.

The path runs through woods of black pine (Pinus nigra) and cedar (Cedrus atlantica) tucked between the fence of the dam and the remains of the Great Royal Enclosure surrounding the royal estate. The path can easily be recognised by the red and white markings of the GR-10 (Long Distance Path), which you will see in several sections of the route.

You will very shortly arrive at the La Teja Spring Park or Miguel del Campo Forest Park, created in 1929. Considerable bird life can be spotted in this area, such as the noisy great spotted woodpecker (Dendrocopos major).

A little further up, beneath the cuttings, is the Currutaca Spring, with a ruined building nearby.

In 1892 the Special School of Rural Engineers began work in this area to replant the slopes of the Monte de la Jurisdicción.

Continue along the path running parallel to the El Romeral watercourse, passing by the little valley with the two springs and water channels to the left.

This will take you to a forest track which heads down to the highway. Cross over and look for the trail which continues as far as a little gate in the metal fence. Here you will find the Cordel del Valle forest track, which is in fact a branch of the Cañada Real Leonesa livestock droving route, leading to the path up to the San Juan de Malagón Pass. This short section can also be walked along the granite slabs covering the water distribution channel which feeds the reservoir. This curious pathway is lined with dense, thorny shrubs such as bramble (Rubus ulmifolius) and sloe (Prunus spinosa). A little further on and you will see the entrance to this channel, around 50 cm wide, and one metre in depth below ground.

The route continues along the path to the left for some 30 metres as far as the water channel connection boxes, from where a track heads directly uphill. Follow this upwards through an eroded section, heading towards the large rock. Further on you will reach a fork marked by a wooden stake, where you should take the right-hand branch.

This track runs through cluster pines as far as the highway, having passed through a fenced area known as the “Galician nursery”.  Plantations of cherry trees can be seen. This is all that remains of a small market garden area, some of them granted to the forestry agents for their own use, with the trees being planted on banked terracing. Continue along the path as far as an area recently replanted with pines and holm oaks.

You will arrive straight away at the highway close by the La Concha Spring. The path continues straight ahead, following the electrical power lines as far as the resting point and the San Juan de Malagón Pass. In this area the trees are mainly Scots pine, with a few willows, brambles and wild rose bushes alongside the watercourses. Continue along the highway to the left, heading towards the house, and you will reach the Luis Ceballos Arboretum. If you decide to take a breather at the La Concha Spring before embarking on this last section of the route, you will need to head downhill and to the right along the highway.

Before arriving you will see a path off to the left along with a sign warning of the risk of fire, leading to a spot where there is a large beech tree (Fagus sylvaticus), Spanish firs (Abies pinsapo), and even European larch (Larix decidua). Above the La Concha Spring the silhouette of two giant Spanish firs dominates the vista. All these species were introduced in replanting schemes in bygone days. The surroundings are the result of the transformation of the natural vegetation over many years. The original flora might perhaps be represented by a stand of Pyrenean oak (Quercus pyrenaica).

Meanwhile, alongside the Arca del Helechal watercourse, the only stream to run through the Arboretum, grey willow (Salix atrocinerea) and ash (Fraxinus angustifolia) grow spontaneously, their branches forming a magnificent arboreal canopy.

Opposite the entrance to the Arboretum, at the end of the car park, a track also heads off up the slopes towards the El Malagón Pass. This is the old Peguerinos track, serving as an alternative route to the resting point and the San Juan de Malagón Pass.

The resting point is at the summit of the pass, at an altitude of 1,537 m, in a clearing dotted with mountain broom. From here there are magnificent views over the El Tobar reservoir and the mountains of the Sierra de la Paramera, the final slopes of the Sierra del Guadarrama, with Alto de Cartagena and its wind farm particularly prominent. In the distance are the foothills of the Sierra de Gredos: Cerro Guisando, Cabeza de la Parra, and on a clear day you can even see the peaks of the central Sierra de Gredos, with La Galana and El Almanzor the highest points.

The return route follows the highway as far as the path leading to the environmental education centre and the Los Llanillos picnic area. This is a very shady setting, featuring some outstanding plane trees, chestnuts, maples and other species. The particularly notable tree, however, is an elm (Ulmus laevis), well over a century old and standing more than 23 metres in height, with a 16-metre diameter canopy.

Cross the cattle grid and continue along an almost horizontal track, heading constantly westward as far as a relatively unmarked track off to the left, which will take a little care to spot.

As a guide, count around one hundred metres from the point at which you leave the highway towards Los Llanillos. The path widens and the marking stones disappear. It is here that the trail begins. A little further on there is a round stone beneath a pine on the left of the track: you should not go beyond this marker.

This track drops sharply down between pines and holm oaks in a zigzag, locally known as “the zeds” or “the seven switchbacks”.

As you leave the woods you will see a track. Continue along it to the left, slightly uphill, following a stone wall and a wire mesh fence around the hunting estate. The flora in this area is made up of scattered shrubs and meadowland.

You will then reach a junction with two gates, and should head through the left-hand one. The route continues along the track running parallel to the fence, which will bring you back to the starting point.