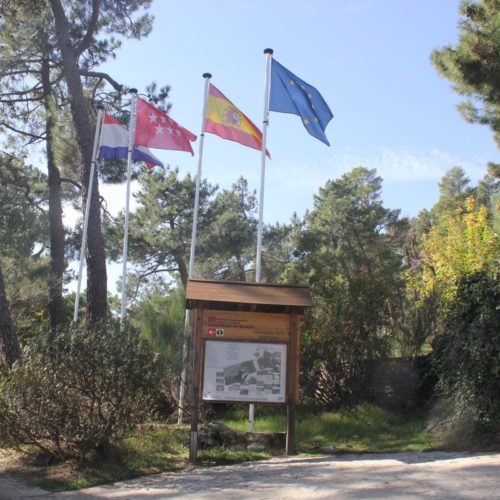 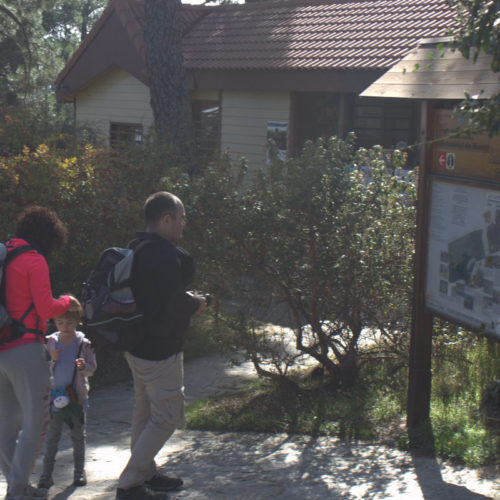 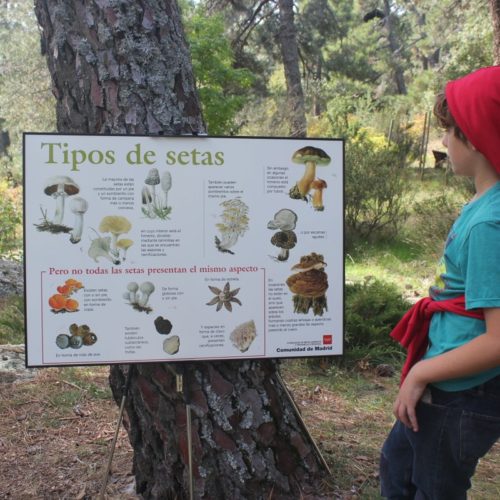 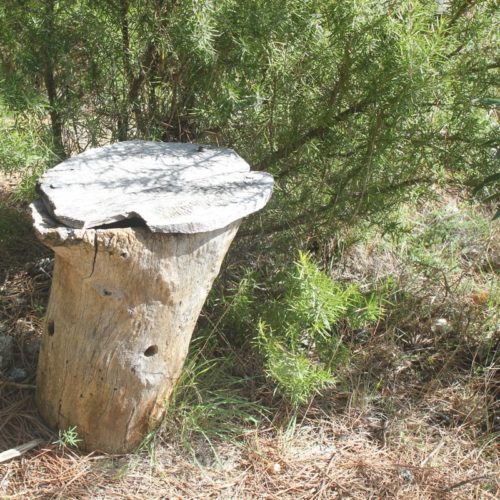 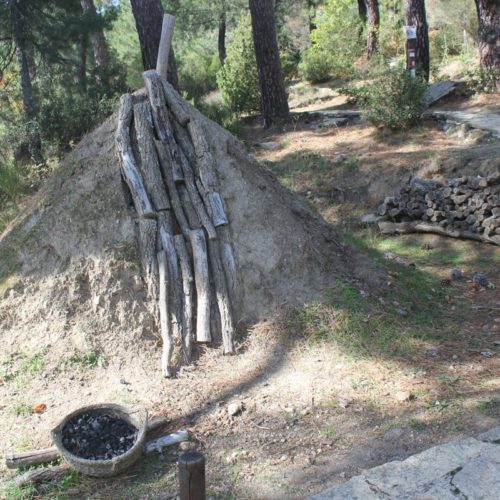 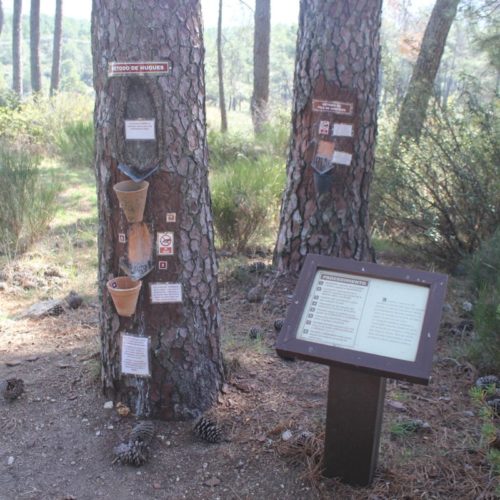 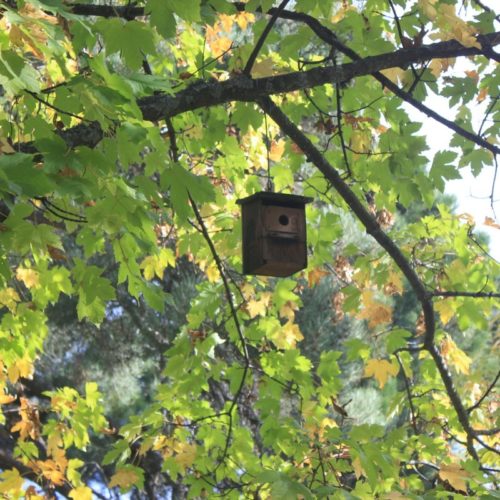 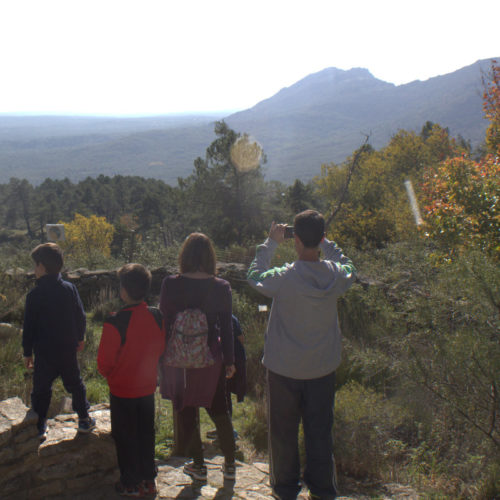 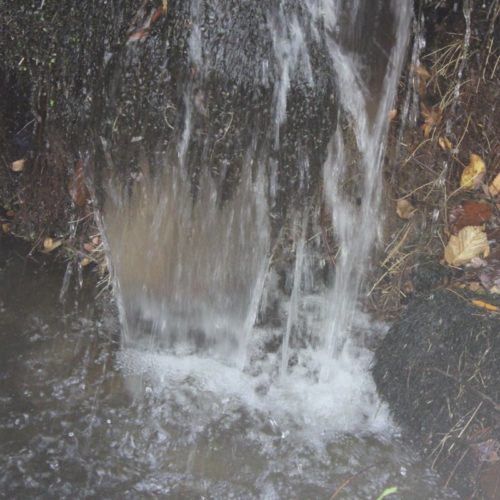 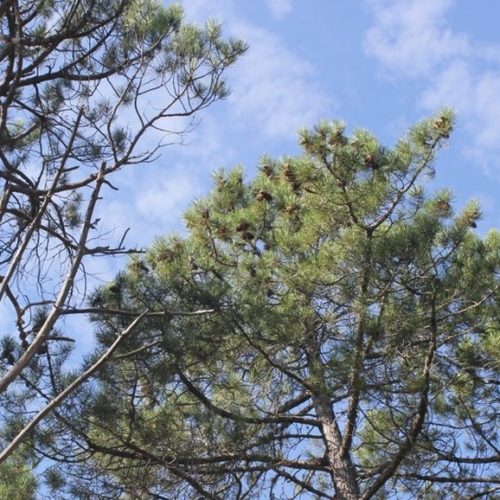 (1) Begin at La Lonja. As you skirt the enclosure you will see on one of the slabs the plate recalling the line of the astronomical meridian through the Royal Site, courtesy of Luis Ceballos Medrano in 1905. Through the arches of the Arcos de la Compaña head right and upwards along Avenida Conde de Aranda, and then take Calle Pinar.

(2) A few metres further on an unsurfaced road leads off to the left up to the La Bola Spring. The woods in this area are of Austrian pine. The street emerges alongside the Romeral Dam. Here there are swifts and house martins to be spotted, while above the mountains fly rough-legged buzzards, booted eagles, and, very occasionally, pairs of Bonelli’s eagles. The route along the left-hand bank leads to the Rural House. Continue along the wire fence to enter the Miguel del Campo Park, built in 1929, through which the Romeral Gully flows.

(3) The park contains the La Teja and La Curruca Springs. It is home to a great many species of tree, including Atlas cedars, prickly junipers, numerous sycamores, old linden trees with characteristic longitudinal cracks in their bark, cherry, horse chestnut, Spanish fir, young elm and chestnut trees, old poplars… Among the undergrowth you may startle a wren, or a Cetti’s or Dartford warbler. You might hear the cackle of a green woodpecker, or see the occasional jay.

(4) Leave the park along a track running parallel to the Arroyo del Romeral watercourse, and continue as far as a water tank at a bend on the road. A few metres further on and you will reach an unsurfaced forest track – head along this and look for the path with the distinctive red and white GR-10 hiking trail marking on the right. The distinctive species found in Abantos here comes to the fore: the black pine or Austrian pine. It is accompanied by different types of broom, labdanum, thyme, flax-leaved daphne…

The path follows these markings across the highway, where you will see the 19th-century terracing of the land for the pine tree plantation. A number of thorny species of rosaceae may be seen here, such as sloe, oneseed hawthorn, dog rose (its red rose hips commonly known as “bumstoppers” because of their astringent properties) and bramble. Throughout this section you will see plenty of pinecones eaten by squirrels (leaving only the tip), holes dug by wild boar as they root for food, and the droppings of mammals such as foxes, stone martens and the like.

Higher up the cluster pines give way to umbrella pines with their distinctive orange bark, the predominant species from this point onwards. At this altitude you may see stands of laurel-leaf cistus (Cistus laurifolius), which can be distinguished from the labdanum by its broader, ridged leaves. There are also ferns, species of broom, thyme and holy flax.

Continue up along a track dotted with scattered stands of Pyrenean oak, holm oak,  Montpellier maple, and at the base of the valleys, willow and ash. During the summer the branches of the last of these are populated by the caterpillars of Abraxas pantaria L., devouring the leaves and hanging from fine threads of silk.

(5) Without crossing the watercourse of the Arroyo del Romeral, head up towards the Cervunal Spring. It owes its name to the “cervuno” (Nardus stricta, or matgrass), a species of mountain grass surrounding the spring, along with hedgenettle. Swifts and housemartins fly overhead.

A little higher up, take the path leading to Abantos from the highway. Head off from the highway to the left, near to where the route back begins: the Camino de los Gallegos, or Galician Way. The track ends on the right at the little house known as the Telegraph, as it was used for this bygone system of flag communication.

(6) You can either continue that far, or turn around a little before on the left and climb up to the peak of Abantos. Flying up above the granite outcrops are plentiful crows, jackdaws, carrion crows and if you are lucky, as they are quite secretive, you may see the odd blue rock thrush.

Behind the weather station right next to a wall is the stone enclosure that Felipe II ordered to be built around his domains. It measures forty-six kilometres in length, and between nine and twelve feet in height. The flora here comprises broom dotted with wood rush and other grassy species, commonly home to long-tailed, jewelled, and Iberian wall lizards. It is not unusual to see common kestrels, common buzzards, booted eagles, and more infrequently a Bonelli’s eagle or goshawk. The flora provides shelter for foxes, rabbits and wild boar, and the marks they make as they burrow and root for food can quite easily be spotted in the area.

(7) A path descends as far as the Snow Shaft Pass. You will arrive at a wire fence marking the provincial boundary between Madrid and Avila, which you should cross to reach another gate in the Felipe II Enclosure, leading to a snow shaft built in the era of Felipe III, which was in use until 1934 and was restored in 1985. Heading back to the track alongside the Enclosure you will reach the summit of Alto de San Juan (with views over the Cross of the Valley of the Fallen and Cuelgamuros). Here you will see the jumping points or ramps installed by Carlos III to allow animals through.

(8) Lastly, head down by the La Naranjera shelter, surrounded by copses which are home to great tits, nuthatches, treecreepers, long-tailed tits, jays, as well as the other species mentioned previously. Flying overhead you may see griffon vultures, as far as the Las Negras Spring. It was here, in Pinares Llanos, where in the spring of 1848 Professor Mariano de la Paz Graell Agüera, a resident of San Lorenzo, described for the first time a wonderful (and now protected) butterfly which he gave the name Graellsia isabelae Graells, in honour of Queen Isabel II of Spain. From this point, take the tarmac track heading down to San Lorenzo. As you pass over the Arroyo del Tobar watercourse, you will see the Ark of San Juan on your left.

(9) The track you are following now merges with the path from Cervunal Spring and continues as far as the Malagón House, where the remains of a snow shaft may still be seen. At the far end of the bend leave the tarmac surface and in a few metres you will reach…

(10) …the Galician Way (and the Trampalón Spring). This route offers amazing biodiversity, with its larch trees and a beech copse. Head downhill and cross the highway, as far as the Cordel del Valle track. Continue across and through a gate alongside an electricity pylon, following the wire fence as far as the El Romeral Dam. Head down alongside the El Romeral Ark as far as Avenida del Conde de Aranda, flanked by horse chestnut trees where the route began, before returning to La Lonja.