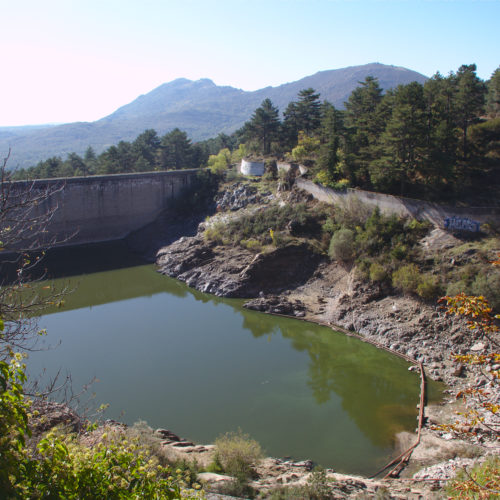 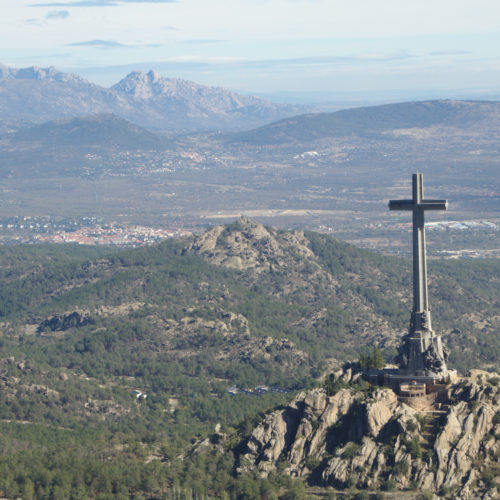 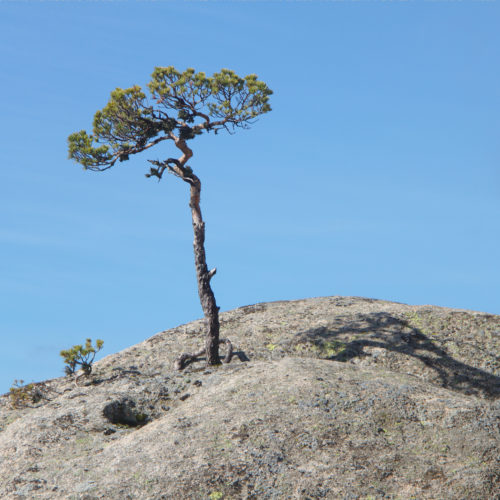 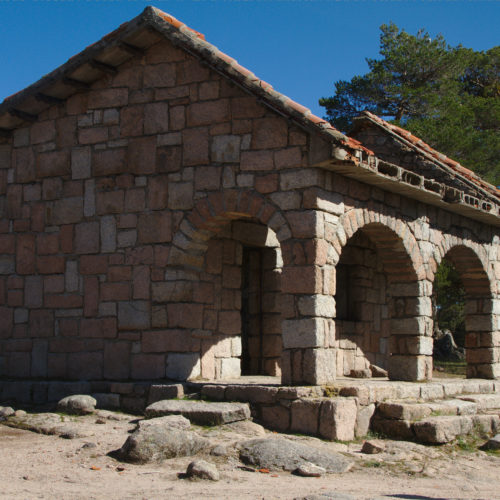 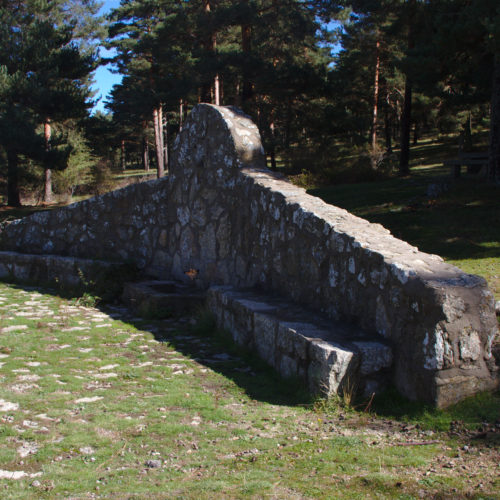 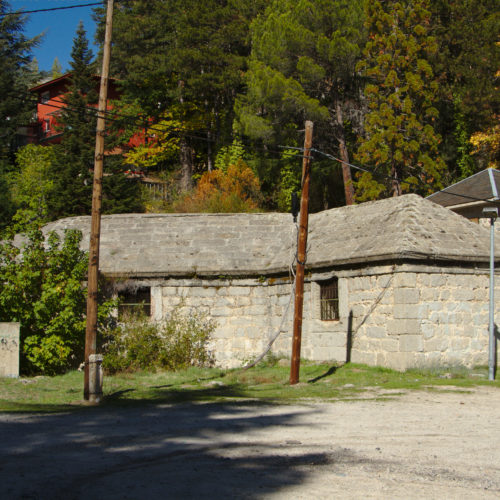 We leave the stone forecourt of the Monastery, the lonja (2). As we walk around the edge of the lonja we can see, in the flagstones surrounding it, the plaque that recalls the line of the astronomic meridian (3) at the Royal Estate, created by Luis Ceballos Medrano in 1905. We walk through the stone archway, the Arcos de la Compaña (4), then turn to the right and go up the avenue Conde de Aranda and continue along calle Pinar.

A few metres further ahead, there is on the left an unpaved street (5) that goes up to a fountain, the Fuente de la Bola. The pine forest that surrounds us is formed by black pine. We continue along the same street to come out next to a reservoir, the Presa del Romeral (6). Here we can find swifts and martins, and over the mountains, buzzards, booted eagles and, more rarely, pairs of Bonelli’s eagles. Walking along the left side, we reach the so-called ‘Rustic House’, Casita Rústica (7). Continuing to walk alongside the wire fence, we enter the Miguel del Campo Park (8), built in 1929, and through which a stream, the Arroyo del Romeral, flows.

In this park are two fountains called the Fuente de la Teja and the Fuente de la Currutaca. We find a great variety of tree species such as the Atlas cedar, prickly juniper, numerous specimens of sycamore maple, old lime trees with their characteristic length-wise cracked bark, cherry trees, horse-chestnut trees, Spanish fir, young chestnut trees and elms; old poplar trees… Among the bushes however, we may surprise wrens, Cetti’s warblers and Dartford warblers. We can hear the laughter of the green woodpecker and see a jay or two.

We leave the park down a road parallel to the stream, the Arroyo del Romeral (10), arriving at a water tank (11), right on the bend of the road. We go up here a few yards more until we reach an unpaved forest trail (12): taking this trail, and on the right, we can see a track with the characteristic band of the Path GR 10, in red and white. Now, the main species that populates Mount Abantos begins to stand out: the maritime pine. It is accompanied by ephedra fragilis and broom, gum rockrose, Spanish lavender, daphne gnidium….

The route crosses the road, following the previously mentioned bands, and as we follow them, we see the terracing made in the 19th century in the ground for the planting of the pine forest. There are some bushes of the rose family, such as the blackthorn, hawthorn, dog-rose (its red fruit is commonly called “hips” and is appreciated for its astringent qualities) and blackberry bushes. Along this section, there is an abundance of pinecones nibbled by squirrels (except at the very tops of the trees), marks left by wild boars and the droppings of small mammals such as foxes, martens, and so on.

Further above, the maritime pine gives way to Scots pine (13), which is easy to distinguish due to its orange-coloured trunk, which will be the predominant species from now on. At this altitude, we can also find rock rose (cistus laurifolius), that differs with the gum rock-rose due to its wider and wrinkled leaves. These are accompanied by ferns, broom, ephedra fragilis, and Spanish lavendar.

We continue our ascension along a path scattered with individual trees of Pyrenean oak, holm oak, Montpellier maple (14) and in the river bed willows, and ash trees. On the branches of the latter, you can see in the summer caterpillars of Abraxas pantaria L. devouring its leaves and hanging from thin threads of silk.

Without crossing the Arroyo del Romeral, we continue upwards until we reach the fountain, Fuente del Cervunal (15). It owes its name to the Nardus stricta, or cervuno in Spanish, and is accompanied by great willowherb. Overhead are swifts and martins.

A little further up, we take the trail that continues towards the Abantos mountain (16) from the road (17). On the left, we come out onto the road, close to where the path to return begins: the Camino de los Gallegos. On the right, the track ends at La Casita, known as the Casita del Telégrafo (18), because it served as a telegraph post in the old flags system.

From here, we can continue on up to there, or turn off to the left a short way beforehand and go up to the peak, the Pico de Abantos (19). Flying over the gneiss boulders, there are many crows, jackdaws and carrion crows, but also, with a little luck since they are very timid birds, we might see a blue rock thrush.

Behind the meteorological station (20) and alongside a wall is the Master Wall (21) ordered to be built by Felipe II around his dominions. It is about forty-six kilometres in length and nine to twelve feet high. The vegetation is bush vegetation of Spanish gold broom, scattered with woodrush and other herbaceous plants, among which usually hide Iberian, long-tailed and ocellated lizards. It is relatively easy to see kestrels, buzzards, booted eagles and, more rarely, Bonelli’s eagles and goshawks (in the pine woods). This vegetation provides refuge for foxes, rabbits and wild boar, whose marks from digging are quite evident on the ground.

A road descends to the pass, the Portillo de Los Pozos de la Nieve (22). We arrive at a wire fence that separates the provinces of Madrid and Avila, we cross it and another gate in the fence, the Cerca de Felipe II, permits us to reach a snow well (23) built in times of Felipe III, restored in 1985, and that functioned until 1934. Back to our path and walking closely alongside the wall, we reach another peak, the Alto de San Juan (24), with views onto the cross of the Valle de los Caídos (Valley of the Fallen) and Cuelgamuros. Here we can observe the jumping places or ramps that Carlos III had built to enable animals to enter.

Finally we descend, passing by the Refuge of the Naranjera (25), surrounded by small woods containing coal tits, nuthatches, treecreepers, jays and the other species that have already been mentioned. And flying overhead, if we are lucky, we can see Eurasian griffons until we reach the fountain, the Fuente de las Negras (26). It was precisely in Pinares Llanos where in the spring of 1848 the professor and inhabitant of San Lorenzo, Mariano de la Paz Graell Agüera, discovered for the first time a marvellous butterfly (now a protected species) which he named Graellsia isabelae Graells, in honour of Queen Isabel II of Spain. From here, we take the asphalted path that goes down to San Lorenzo. Passing over the stream, the Arroyo del Tobar, on the left, the Arca de San Juan (27) can be seen.

Our track joins the one which comes from the Fuente del Cervunal (28), reaching the Puerto de Malagón (29), where the remains of a snow fall can still be seen. At the end of the bend, we leave the tarmac in order to reach, just a few metres away…

(10) …the Camino de los Gallegos, and the fountain, Fuente del Trampalón (30). This path surprises the walker with its biodiversity, with larches and a small wood of beech trees, near the Arca de la Merinera (31). It continues downwards and crosses the road, stopping at the Cordel del Valle. Here it crosses and goes through a door next to an electricity pylon to go towards the wire fence which we follow down to the reservoir, the Presa del Romeral. We continue our path down, passing close to the Arca del Romeral (32) and reach the avenue Conde de Aranda with horse chestnut trees on each side, where our route began, until we once again have reached the stone forecourt of the Monastery, the lonja.