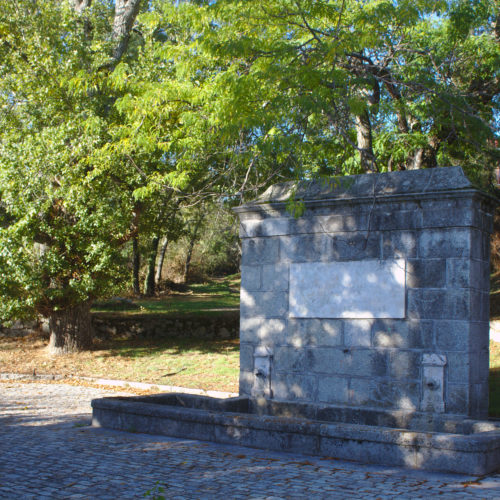 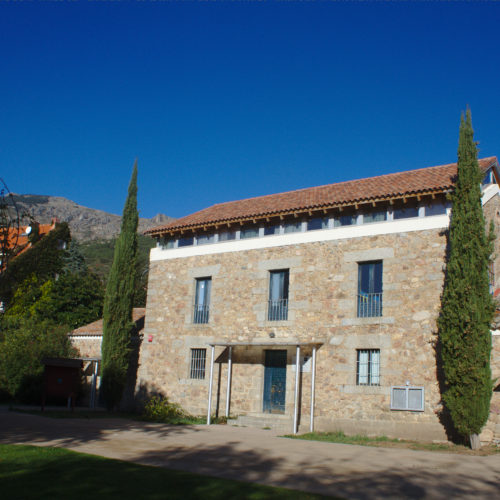 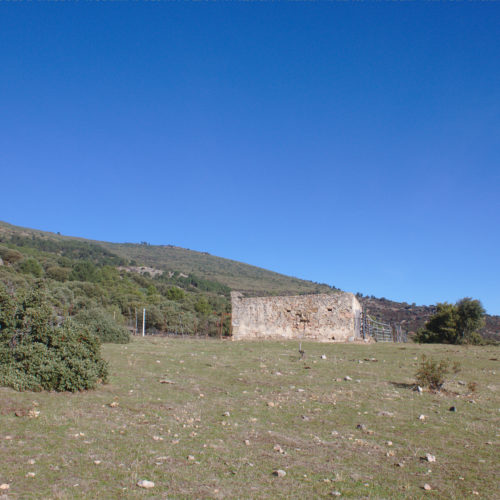 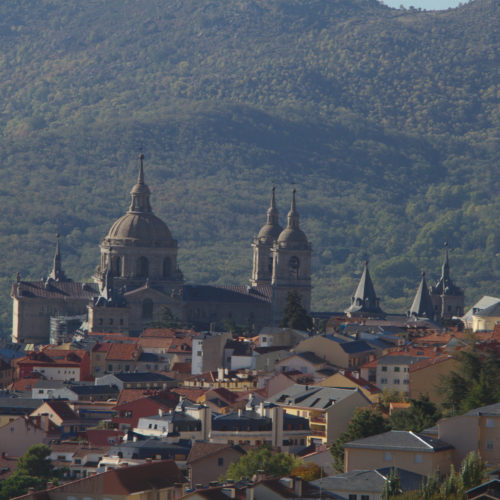 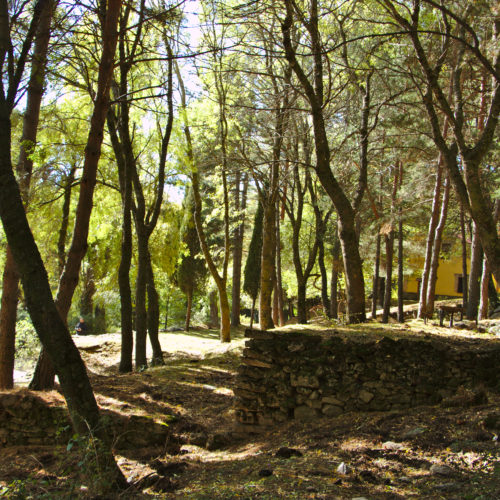 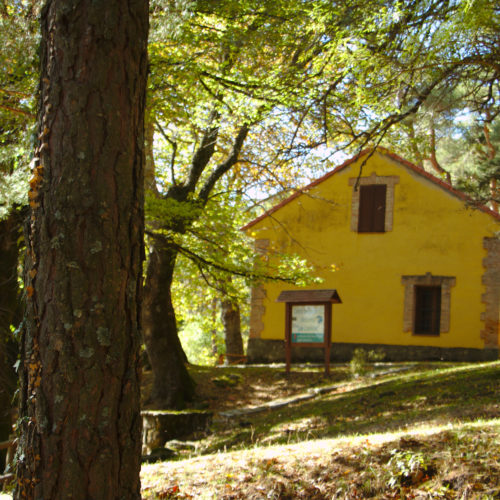 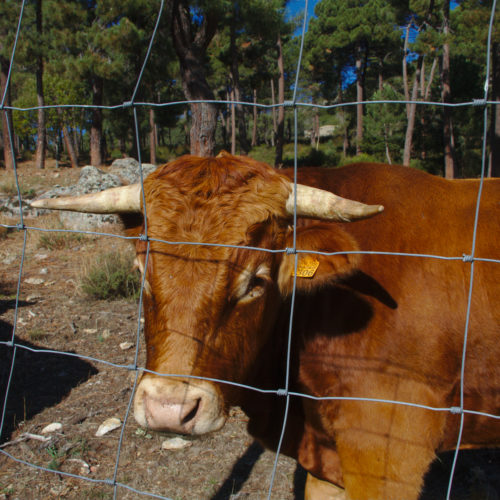 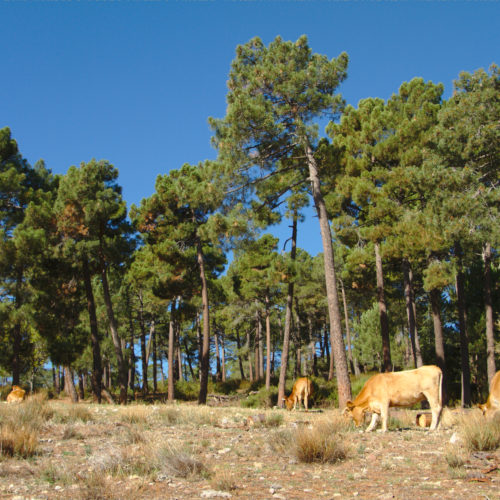 (1) We leave from the fountain called Fuentenueva, next to the Guadarrama road (M-600), beside the housing development called Urbanización Felipe II. It was built by Fernando VII in 1815 and it is close…

(2) …to the refuge and natural resources centre, the Albergue Centro de Recursos Naturales. We are surrounded by magnificent specimens of ash, willows, elder, wild plum, European ash, elms, blackthorn, poplar and honey locust. The private gardens of the area serve as a refuge for blackbirds, robins, reed warblers, coal tits, blue tits, warblers, etc. There is a panel containing bird information located close to the building named the Casa del Polvorín, which can help us to identify the birds we see. This section of transition between the pine wood and the holm oaks is used by azure-winged magpies to pass from one ecosystem to another.

The route begins on a path that ascends parallel to the right of the stream called Arroyo del Barrancon and reaches the area of the Polvorín (a levelled area where we leave on the right the wall that goes up to the peak, the Pico de Abantos, and the stream). Here we can see a large part of the mountainside that was burnt in the summer of 1999, which is currently being reforested and regenerated.

On the left is the recreational area of El Tomillar, made up of a pine forest boasting maritime pine and stone pine, together with small holm oaks, tree of heaven (ailanthus altissima), cypress trees and false acacia with its characteristic twigs of white flowers, known popularly as “pan y quesitos” or bread and cheese. Among the bushes, we find white broom, scotch broom, broom, phillyrea angustifolia and flax-leaved daphne, together with other small plants. This is a good area to spot European golden orioles, booted eagles and buzzards.

The path comes out on to the paved forest trail, keeps going for 50m. and turns to the left at the Finnish pass (we can see a mass of Pyrenean oak, an example of the vegetation which used to dominate these slopes). In spring and summer, we can see a multitude of European bee-eaters flying over the area. The pine forest alternates with open areas where we can find short-toed treecreepers, Bonelli’s warblers, European serins, chaffinches, rock buntings and many coal tits. All these sights are mixed with the sound of the azure-winged magpies flying from one tree to another. The path levels out, passing by the stream called Arroyo de la Cruz and further on…

(3) …the stream called Arroyo de la Cebadillas. The presence of prickly juniper and gum rockrose accompanied by dog-rose, blackberry bushes, marjoram, thyme and Spanish lavender is worthy of note. If we continue to walk uphill next to the stream, we will discover groups of magnificent chestnut trees.

In this part of our route, the droveway (or cattle path) that we are walking along marks the limit as regards height of the built-up area of the town of San Lorenzo de El Escorial, above which the Monte Abantos rises, declared to be a site of great beauty or Paraje Pintoresco in 1961. This droveway (via pecuaria in Spanish) finally joins the road, the Paseo Miguel de Unamuno. Just before the cemetery, turning to the right on the street Puerto de Malagón and walking uphill above the houses along a corridor among the pine trees, we reach the stream called Arroyo de La Barranquilla. In the streambed, there are outstanding small copses made up of numerous Spanish fir trees, introduced by the forestry school, the Escuela Especial de Ingenieros de Montes, at the beginning of the last century.

From here, we continue through the ravine called Cañada Real Leonesa, close to some houses on our left, until we reach the paved forest trail that we cross to go down another, unpaved trail that takes us to the stream called Arroyo del Romeral.

(4) We reach the stream bed of the Romeral, whose waters are channelled to the reservoir of the same name. In this area, we can observe a great variety of species like Sessile oak or Monterey pine. The route continues parallel to a series of medium-voltage power lines, leading to a gate that we go through:

(5) We take the path on the right that leads us to the stream called Arroyo del Helechal. A few metres upstream, we can see the arch. It is a granite ashlar construction which, together with others of similar characteristics, Felipe II ordered to be built to collect and supply water to the Monastery. Inside, we can see the system used to progressively decant the impurities in the water. Walking downstream, we reach the dam called the Presa del Infante. As it is a fairly wide track, it provides lizards and wall lizards with a sunny spot to soak in. Here, common buzzards are especially abundant, together with booted eagles and some Bonelli’s eagles. And waiting until the very last moment to take flight, we come across hoopoes.

After passing the stream called Arroyo de los Castaños, the path divides into two: we follow the trail that is most clearly marked, the one on the left. Further on, we come across the power lines again and we follow them until we reach a country house with the name “El Cobijo” (The Shelter). Just after we pass it by, a path appears to the right. The main vegetation is maritime pine with scrubs of the rose family, such as blackberry bushes and hawthorn. Gum rockrose is abundant and juniper, Spanish lavender and ferns will also appear.

(6) Here begins the pathway known as the Camino del Caracol that zigzags upwards until it reaches a trail where we can see the characteristic shape of a good specimen of Scot’s pine, or some mistletoe, a parasite of pine trees.

(7) Little by little, and once having passed the gully of La Cabeza (the slope that we are crossing), we can make out La Torrecilla, a gneiss boulder that stands proud over the slope, with a height of some twenty metres, and which gives its name to the nearby stream.

(8) To the right, we head towards the recreational area of Los Llanillos and its shelter, now converted into an environmental educational centre, the Centro de Educación Ambiental. In this area, an old forest plant nursery, we can see species such as maritime pine, chestnut trees, plane trees, willows, poplar, elms – the elm which is near the fountain is classified as a singular tree – maples, ash trees, common aspen, cherry trees, Montpellier maples, whitebeams, Lawson’s Cypress, and cedars.

(9) A little further on (off the route), we find the arboretum, the Arboreto Luis Ceballos.

The route takes us to the left, to the stream called Arroyo del Avispero, where right at its side there is a wall that we cross. From this moment on, we can continue along the multiple paths that were created from the terraced earth used for reforestation. We may see the fauna we have already mentioned until we reach our destination: coal tits and crested tits. And in the areas close to the stream, we may find blackcaps and melodious warblers. Other birds, such as rock buntings, chaffinches and any number of short-toed treecreepers will also show themselves. In the open areas, we will be able to enjoy panoramic views over the park of La Herrería (with the dam, the Presa del Batán, in front), the Machotas or the mountain pass called Puerto de la Cruz Verde.