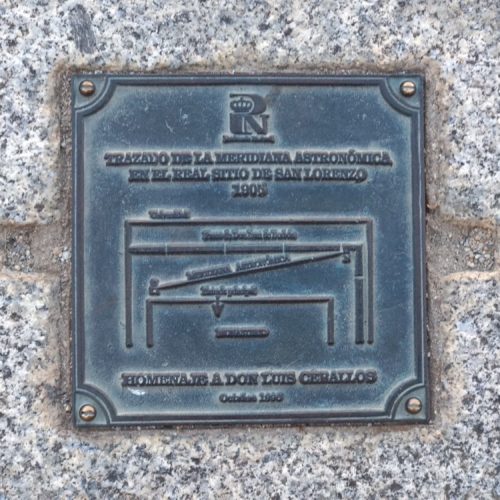 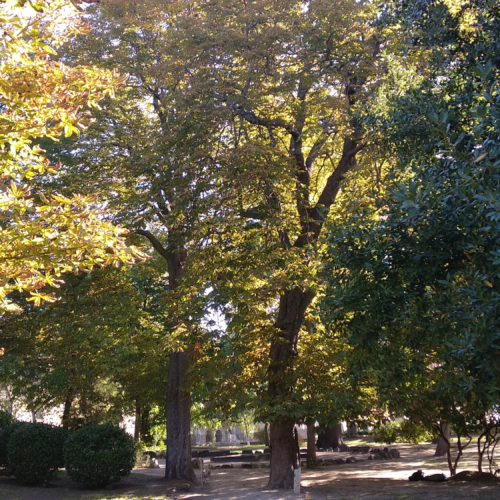 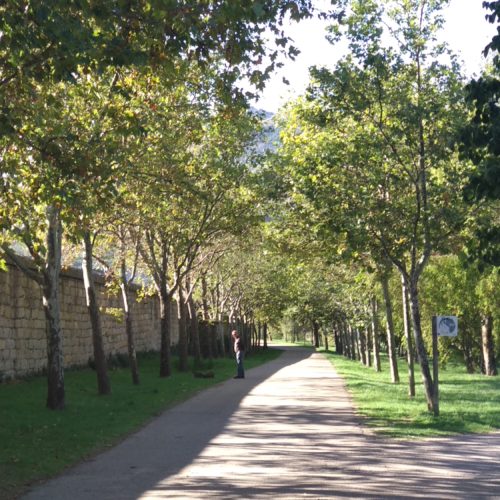 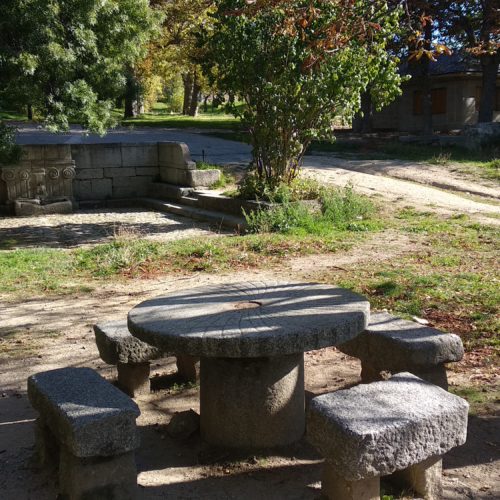 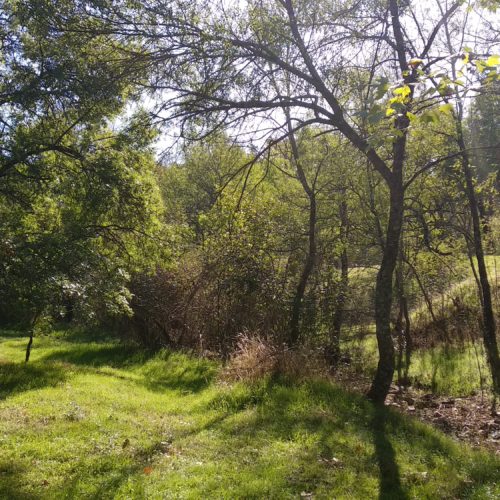 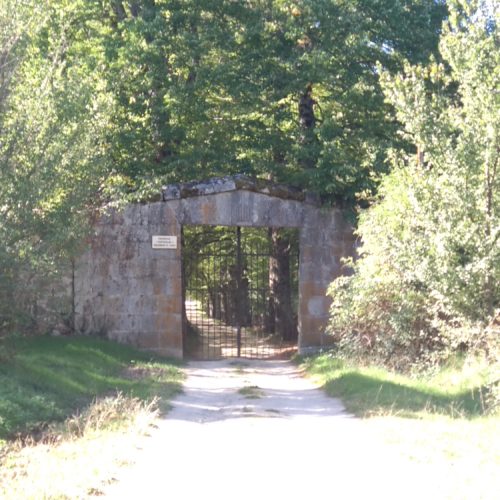 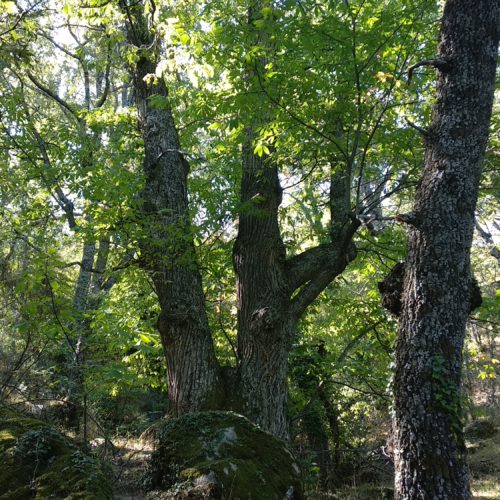 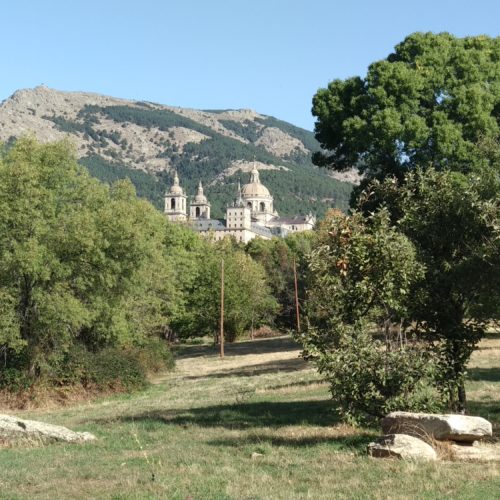 The area through which this route runs is part of the Natura 2000 Network, as it belongs to the “River Guadarrama Basin” Area of Special Conservation Interest. The natural and landscape status of La Herrería remains intact thanks to its National Heritage listing, which meant that it was not sold off in the Confiscation of Crown Assets in the final third of the 19th century.

The route begins at the Tourist Office (1). Walk along Calle Grimaldi and you will see the magnificent Royal Monastery of San Lorenzo de El Escorial (1563-1584) directly up ahead. Head through the wall marking the edge of La Lonja. To the right are the buildings which enclose it: the First and Second Houses of Offices (1587-1596), the House of the First Secretary of State and the Third House of Offices (1785-77), with the House of the Prince and the Queen opposite (1770-1776). On the parapet of the wall around La Lonja, a plaque commemorates the meridian traced by Luis Ceballos Medrano in 1905 (2), supplemented by another to the left of the entrance to the Monastery (3). An imaginary line between the two points due north, indicating that the Royal Monastery is not perfectly aligned with the points of the compass (12° north-east declination).

Opposite the House of the Company (1590-1597), now the Escorial – María Cristina Royal University Centre, it is connected to the Infirmary by a building made up of Arches (4) beneath which stands the entrance to the Friars’ Garden (free entry, closed on Mondays). Further along a viewing platform (5) offers outstanding views of the Royal Monastery, the Garden, the Market Gardens and the Lake. The skyline of the city of Madrid can also be made out on a clear day.

Alongside the viewing platform a bronze statue of Felipe II (6) invites visitors into the Adolfo Suarez Park – RCU Escorial-María Cristina (closed on Mondays), home to a Virginia juniper (7) and to horse chestnut trees over a century old (8), registered as outstanding heritage trees of the Region of Madrid (RM). Leave by the gate opposite and cross Paseo Carlos III with great care. The line of horse chestnuts will lead you to the two columns (9) at the entrance to the La Herrería area, declared a Picturesque Landscape Site in 1961, along with the Abantos Pine Woods.

Head down the slope of the Cuesta de los Pastores, and at the first fork take the path to the right as far as the Fuente del Seminario (10), Seminario Spring, one of the numerous stone springs dug below ground level that dot La Herrería. Here you will find an information board featuring the distinctive local bird life and a small tourist office with a number of panels providing an insight into La Herrería (accessible during opening hours).

A blue arrow marks the path leading to the beautiful love tree (11) at the intersection with Cuesta de los Pastores, which you should follow until it crosses over the stone bridge, from where you will see a line of plane trees (12) and to your right the La Herrería Royal Golf Club (13). A signpost (14) indicates the nearby Fuente de los capones (15), and a little further on the Pilgrims’ Cross (16) indicates that this point lies on the route followed by the cortège accompanying Our Lady of Grace, the patron saint of San Lorenzo de El Escorial, on the procession as far as the chapel dedicated in her honour.

At the bridge over the Arroyo del Batán watercourse (17) you can appreciate the diverse landscape of the gallery woodlands growing along its banks, including poplar, willow, ash, rosaceae species, brambles and hawthorns. The fence alerts you that you are now entering an area through which traffic flows on its way to the car park. Take care when crossing the M-505 at the zebra crossing (18). The highway forks at another Pilgrims’ Cross (19). Take the right-hand fork. There is a branch off to the left leading to the Chapel of Our Lady of Grace (20) with its own Spring (21). This is the site every second Sunday in September of the Pilgrimage of Our Lady of Grace, declared a Festivity of National Tourist Interest in 1988, at which the young people pay homage to their patron saint while dancing the ‘rondón’ to the rhythm of the woodwind ‘dulzaina’.

Follow the path that you arrived on as far as the main gate of the El Castañar estate (22), from where you will see the tree-lined promenade that runs almost all the way through. Within there is a 13th-century church dedicated to Our Lady of La Herrería, the patron saint of the municipality of El Escorial, who was relocated to the Church of San Bernabé at the end of the century before the building was destroyed in the era of Felipe II. Retrace your steps as far as the fence (23), which will now be on your left. The narrow track you should follow forks here (24). Take the left-hand branch which climbs gently uphill parallel to the wall of El Castañar, passing by a service entrance to the property (25).

Once you have reached the tarmac track (26), head left as far as the La Reina Spring (27), amid a wonderful stand of chestnut trees, including two notable examples on the RM heritage tree list (28 and 29), along with Montpellier maples and Pyrenean oaks closer to the watercourse that flows intermittently down the mountain. The adapted and accessible “Ecology Track” also begins here, running along the forest tracks as far as the Seat of Felipe II. Continue as far as a sign (30) opposite the famous ‘Hand Linden’ tree (31) behind the stone wall of El Castañar, missing two of the five branches which originally gave it its name.

Continue past the Dos Hermanos Spring (32) on the left, and the Bear Cave (33), guaranteed to fire the imagination of younger visitors. On the right a path (34) leads to a further fork, where you should continue alongside the fence. Here you will see the dry stone wall which continues along the right, marking the boundary of the Historical Territory of Felipe II, declared a Site of Cultural Interest by the Regional Government of Madrid in 2006 and covering practically all of the municipalities of San Lorenzo de El Escorial and El Escorial. Follow the track on the left as far as the ruins of the Deaf Man’s House (35), a forest ranger’s residence from the 16th century. This spot offers fantastic views of the surrounding landscape and the next point on your itinerary: la Silla de Felipe II (36), the Seat of Felipe II, reached along one of the trails that end at this vantage point from which, as tradition has it, Felipe II observed how work was progressing on the Royal Monastery, and which recent studies suggest could have been a Vetton altar.

Head up the steps carved into the stone to take a photo of the wonderful panoramic views, and sit where Felipe II is believed to have kept an eye on the building of the Royal Monastery. Alongside stands a beautiful Montpellier maple with RM heritage status (37), and further on a huge granite boulder balancing atop another rock (38).

Head down through the dense woodland of Pyrenean oak (39), intermingled with Montpellier maple, juniper, butcher’s broom and flax-leaved daphne, passing by the Las Arenitas (40) and La Prosperidad Springs (41). The path will take you to the La Silla highway, which you will recognise. Cross back over the M-505 at the zebra crossing (42). After crossing the bridge over the Arroyo del Batán watercourse, take the right-hand branch at the fork (43), passing in front of the Hostel of Santa María del Buen Aire (44). Take the little path leading off to the right, and across the wooden walkway into an area lightly wooded with ash (45) and Pyrenean oak, along with shrubs such as sloe, hawthorn, bramble and wild rose. Off the path to the left you will see a majestic ash tree, with RM heritage status (46). Continue as far as Calleja Larga. You will pass by the Guard House (47) on the left, and on the right a concealed gravestone which forms part of the wall of the House of the Heir Apparent (48).

At the end of Calleja Larga you will arrive at the entrances to the Copse of the Royal Monastery (49) on the left, which is not open to the public , and the delightful little House of the Heir Apparent on the right, with its park and courtly gardens (50). On the way towards the Royal Monastery stop off at the small balcony (51) offering a view of the King’s and Queen’s Gardens, before finishing the route.